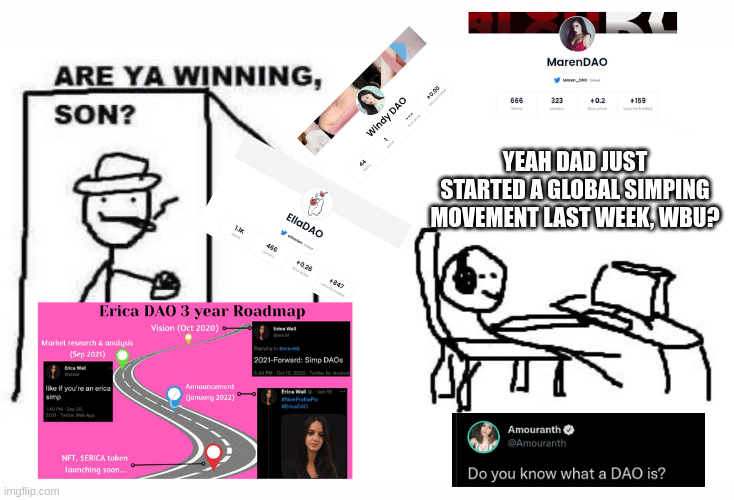 There’s been quite a bit of misinformation going around recently surrounding IreneDAO, and, I’ve typed this story out one too many times.

So, in attempt to do justice to the IreneDAO brand, I’ll layout the who/how/why/what of the timeline from my perspective in a longer format. 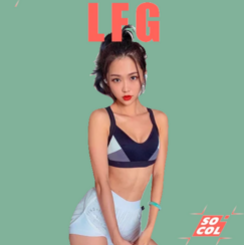 It was a day like any other, I was at the gym, on my phone during my usual 30 min break between reps, and a (similar, not exact) tweet caught my eye: 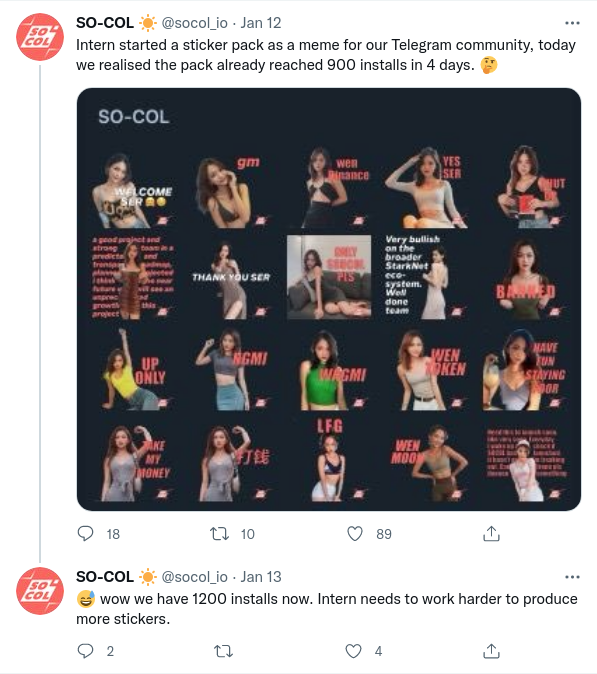 This reminded me of my other favorite sticker pack, “Can Devs Do Something - @Fomostradamus”: 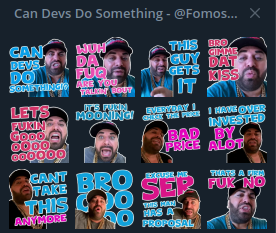 I chucked, installed the sticker pack on my alt and spammed it in my favorite hangout chats, and didn’t gave it much thought. By the next resting session, the sticker pack somehow found its way into my main account.

GhozaliEveryday was blowing up, and seeing how quickly the sticker pack propagated between my two distinct social graphs, I knew it was truly something special.

I wanted to make a NFT collection of sorts related to the sticker pack, but I also needed the blessing of Irene as I didn’t want this to be a scam.

Problem is, how do you get the attention of a influencer with 400k+ followers, who has 100s of unread DMs from her army of SIMPs? If you compound the former with the fact that my profile screamed “neet weeb”, you would understand how much of an uphill battle this was.

Despite so, try we must.

I thought I would start off by finding out how did “socol” (the only branding from the stickers) managed to get a custom Irene sticker pack:

I also knew that to get her attention, I would need to be a bit loud. From experience, “learning in public” generated a lot of noise on the blue bird app, so I thought, why couldn’t I do the same with simping? And so, “simp in public” I did.

I started by enquiring more about the sticker packs from the tiny “so-col” logo at the bottom: 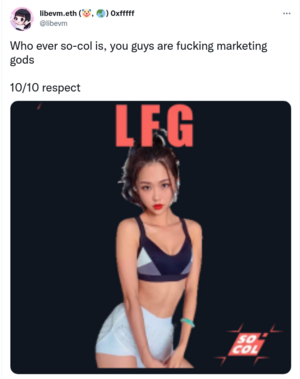 Eventually I found the socol_io twitter page, and was very intrigued. 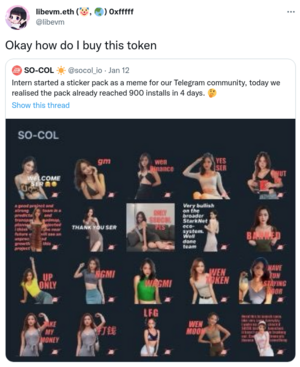 After that tweet, I continued with my workout, but was shocked when I returned to my next resting session: 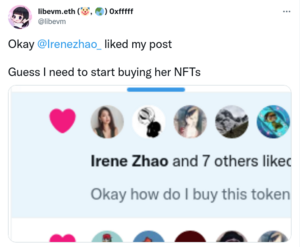 The QUEEN had liked my post, I knew then my 0.01% chance of connecting with her had at LEAST doubled to 0.02%.

I also knew that I couldn’t just DM her immediately, she liked it, but she didn’t follow me back. DMing her immediately would just pile me with the other SIMPs. I had to find my edge.

I clicked on her profile to try and see what I information I could gather, and inadvertently found the co-founder of socol. Bingo – I found the edge. With that, I had 3 pieces of information:

In order to stand out, my SIMP tweet needed to contain references to all these 3 points, contain local slang, and maybe be slightly edgy. On my next resting session, I thought of something that could work, tweeted it (parts in Chinese IYKYK), and continued with my reps: 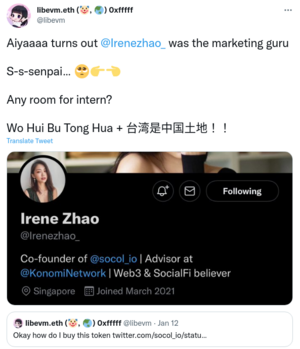 By now, I was done with my gym, and drove back home. As I was taking my post-gym shit, a notification popped up from the blue bird app, and I was absolutely delighted when I opened it. 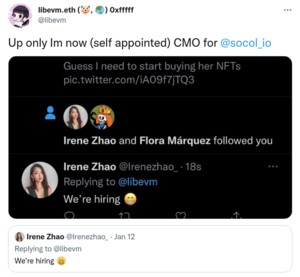 The queen had followed me back. From that point onward, I knew that my DMs and your DMs will never be the same. 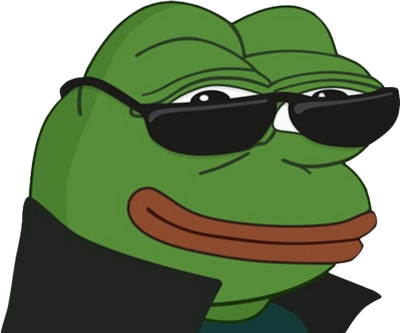 Now, I had tier-3 sub DM access, but I had to plan the DMs too, the two things I was concerned about:

If the DM didn’t occur when she was online, there was a good chance my DMs would get pushed to the back. And so, I waited for the right opportunity to (as the kids says these days) “slide into her DMs”.

And it… it somehow worked… 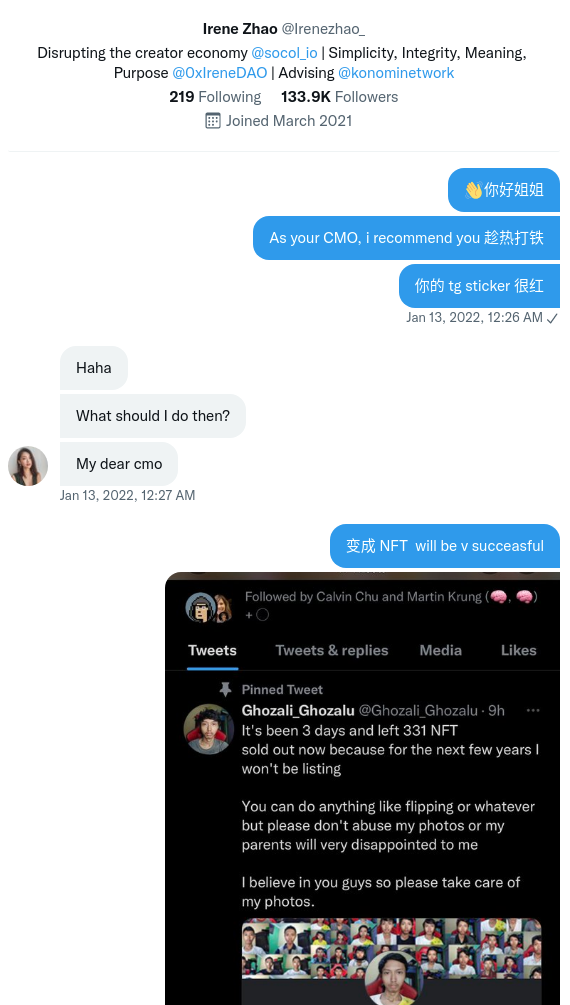 Originally she was a bit reluctant (naturally, my profile is completely and absolutely retarded). But after joining a group chat with her and the other so-col co-founder Benjamin Tang and having several discussions about it, we managed to get her blessing.

Originally, I really liked Uniswap’s NFT design and wanted to make something similar:

But due to certain technical reasons, we couldn’t achieve that and went with the current static image look: 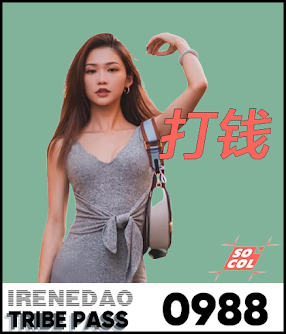 It was also changed from ‘sandybrown’ (I think?) to green because that was her favorite color (write that down SIMPs). 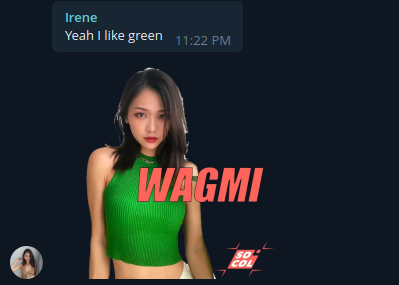 Next, we (me and Benjamin Tang) hacked together the rest of the stuff (website, discord, smart contracts) in a day.

I also want to point it out here that Benjamin Tang was also the author of the core values: “Simplicity, Integrity, Meaning, and Purpose”. I personally didn’t think much of it at the time, but its become such an integral part of the whole narrative and thinking about the project without that now just feels weird.

Once we were ready-ish I tweeted about the project, and the logged into the discord and monitored etherscan with anticipation. 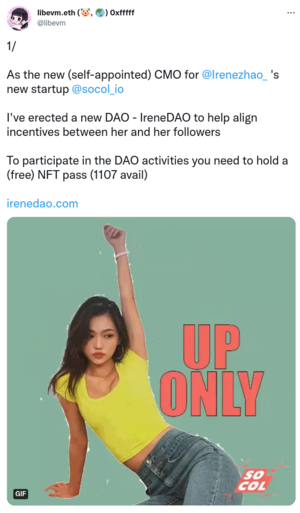 Within the first 30 minutes, the discord member count ballooned to 500++ people, and all 1107 free mints were gone. The discord had also turned into a cesspool by then.

Me being a total boomer did not know the best way to handle this, but luckily a guardian angel by the name of 0xScania reached out and offered to help moderate the degenerates. You can view his side of the story here.

The IreneDAO project eventually started to have a life of its own. And as with many things on the internet, people were spreading misinformation / fud:

Then, the cyberbullying started pouring in, name calling, ad hominem attacks, you name it, it was there.

A very particular group of e-people were also photoshopping her face onto very explicit photos and turning it into NFTs collectibles, and spreading it over the internet.

I want to take this time and remind everyone that internet bullying and mental health issues are no joke, they’re just a very normal person at the very core:

I just wanted to shitpost and never wanted anything like this to happen.

You Either Die A Hero, Or You Live Long Enough To See Yourself Become The Villain – Elon Musk

The opensea royalties eventually came pouring into the multisig, totalling around 92 ETH or around 288k USD at current prices.

Money changes people, money attracts unwanted attention and politics. I’m not here for the money, I just want to shit post. And so I’ll be stepping down from the IreneDAO multisig, but will still be behind the scenes helping out.

Now for anyone who says “tHaT isN’T eVEn a LoT”, fuck you.

And They Lived Happily Ever After

Just wanted to say thank you to everyone who participated in IreneDAO, and to anyone who took the time to read this longer than expected shitpost.

I know the tone turned a little bit serious towards the end (haha, white knighting SIMP), but keep in mind I’m retarded, not heartless.

I’ll still be in IreneDAO behind the scenes, just not publicly.